The Federal Housing Administration was created by Congress in 1934 to guarantee private mortgages, which in turn would cause a drop in interest rates and a decline in the size the down payment required to buy a house. As this organization strived to better the real estate economy, it damaged the value of many African American and homes through their use of maps that rated neighborhoods according to their perceived stability. These maps would have manly three different colors on them: Green, Yellow, and Red. Each color represented the stability of the neighborhood as well as its probability for insurance. Green area, also rated as "A", were neighborhoods that were considered safe and excellent prospects for insurance. On the other end of the spectrum we have red, also rated as "D". These neighborhoods were considered unsafe and usually considered ineligible for FHA backing. This system of color coding was also referred to as "redlining" which not only increased the racism within backed loans and the mortgage industry, but excluded African Americans from the most legitimate means of obtaining a mortgage. 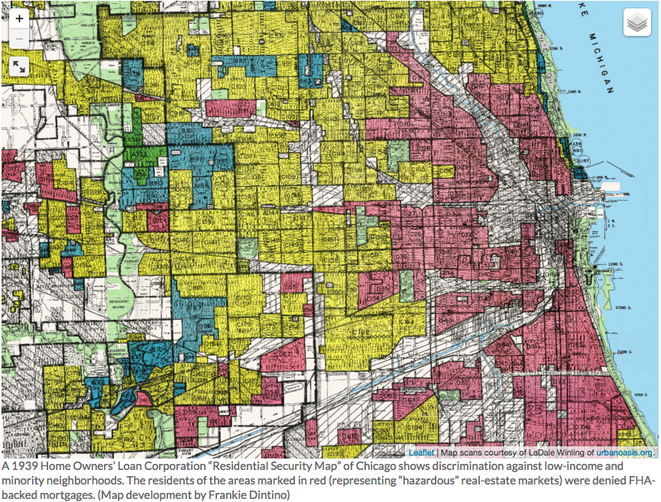 "'A government offering such a bounty to builders and lenders could have required compliance with a nondiscrimination policy,' Charles Abrams, the urban-studies expert who helped create the New York City Housing Authority, wrote in 1955. 'Instead, the FHA adopted a racial policy that could well have been culled from the Nuremberg laws.'" (Coates)